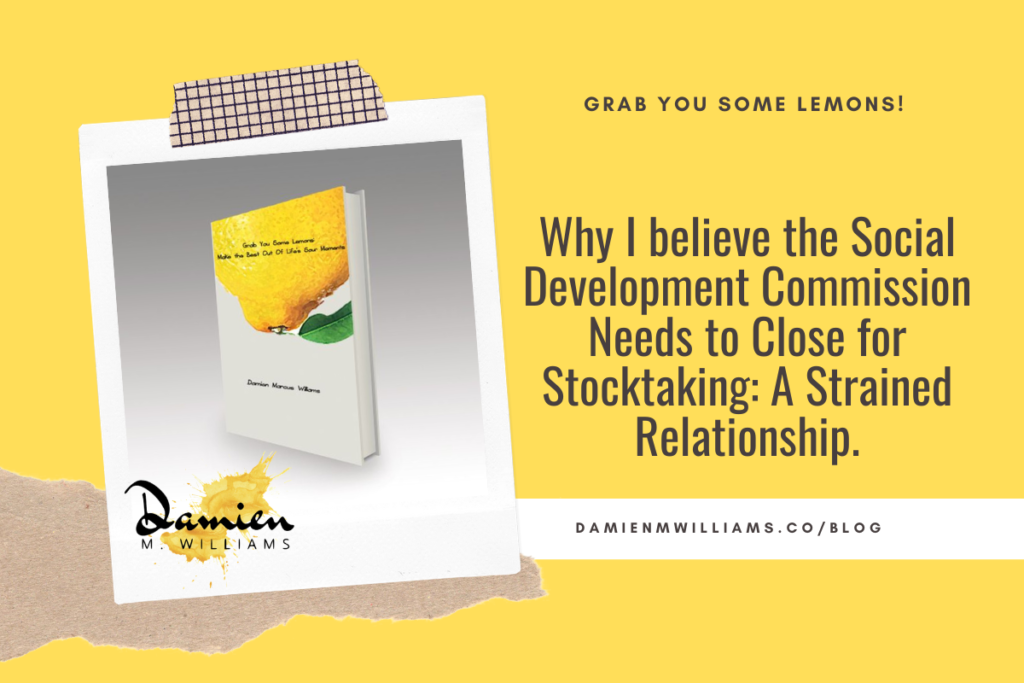 According to their website, the Social Development Commission (SDC) is “the principal community organization agency working with Jamaica’s 775 communities.” Its vision is, “To be the leading community development agency working within a Jamaican Society where all citizens actively participate in a process and benefits from the resulting good governance, economic prosperity, sustainable environment and social well-being.” And, it uses for a motto: Building communities; Building Jamaica.

While that might have been the ethos of the agency when it began in 1965, my experience with it over the course of the last five (5) years has led me to believe that the SDC has moved away from its vision, mission, mandate and motto because of the quality of persons employed to carry those out.

So, it has been 3 days since I had this rant coming about my experience trying to partner with SDC in community development, since 2015. Three community development officers and a Parish manager after & I have come to the conclusion that something is attributively WRONG with the DNA of the SDC and it is failing in delivering on what it has promised to its stakeholders: citizens, donors & government.

In 2015, I went into Naggo Head as a community mobilization officer for #habitatforhumanity on a #USAID funded project in Disaster Risk Reduction. There was an SDC officer assigned. It was said that the community was hard to mobilize because people wanted handouts, loved war, etc. The SDC officer often threatened to leave them alone. I tried several events to work with him to create events that will engender trust, cohesion, and social capital to help us get the work along. Many nights I was carried away by bus after having fallen asleep because of 12 & 16-hour workdays, holding meetings that SDC failed to show at.

We managed- THE COMMUNITY and I – to put a governance structure together without the assistance of SDC to have a citizens’ association. In developing the capacity of the newly formed group, we gave them events to plan, budget for, and execute. That revealed to us who had issues with power and managing money in a transparent & honest way. To treat this, I invited SDC to come in and train on the fiduciary responsibility of the officers of the CA. He shirked that responsibility and because of persistent thievery by the leadership of the CA, I had to think about another way to hand over and sustain the gains of the project. Ergo, I thought of the Naggo Head Advocates Council, which would be registered through the Department of Cooperatives and Friendly Societies (DCFS). The thinking was that if this group is registered with them, they could have the advantage of charity benefits but still have the latitude to operate as a business.

Because in such communities there tends to be little access to finance to do home retrofits to make them more resilient (we were implementing a Disaster Risk Reduction (DRR) project at the time), a revolving loan system with low-interest rates was imagined. So the NHAC came into being and would be the community organization to whom all the gains & assets of the project would be bequeathed – including a community resource centre (CRC), which was an abandoned building that was being used as an animal pen and public space for open defecation. The President of the NHAC and I used our social capital to get the landowner to lease us the land for 15 years after having refused to do so for the MP, Councilor, and SDC. Promises were made at all levels (MP, SDC, Mayor) to:

1. Add a second floor for offices

None of those promises were kept!!!

. As an output of the project, a Redevelopment Plan was developed using the local sustainable development planning (LSDP) methodology. It presumed the citizens as the experts in their lived realities and the solutions to address them and got technical suggestions from government agencies and private sector as well (very similar to the mandate of SDC & their definition of “participation“.

The comprehensive plan also had pullout activities/plans of what the community can do for itself and a business plan for using the centre to create opportunities for residents and keep the doors open. Participation (not placation) has always been the way I chose to conduct development work in stigmatised communities. My mentor, Dr. Paulette Griffiths, taught me from early that my job is to work myself out of a job. Unfortunately, too many of us in the field, work to keep ourselves employed rather than help to get rid of the conditions that we went to try to fix with the people. We have failed to identify among them, the assets they have to fix it.

I left Naggo Head, leaving behind an empowered citizenry and local governance structure that could lead the community into the future they desire & DESERVE. Since the end of the project and my departure, the NHAC has:

1. Been able to complete the building by implementing the business plan (with NO help from those who promised).

2. Distribution of hundreds of care packages (starting waaaaay before covid).

3. Acquire a wheelchair for a young child who nobody knew existed in the community because the parents were hiding her; took said child to see a doctor and registered child with the council of persons living with disabilities.

4. Partnered with HEART to come into the community to train women and men in bartending/mixology, housekeeping (and others in the pipeline only because of Covid19).

5. Partnered with a church to deliver CXC and CAPE classes.

7. Partnered with Food For The Poor Jamaica to built a house for an elderly man, who was living in a house that even if he stayed inside him wudda Ketch Covid19 because inside his house had less shelter than under a mango tree.

From the building in question was commissioned, the SDC, being in the know of WHY JamHabitat didn’t continue the relationship with the CA and created another group, has sought to lay its hands on that building and in so doing has helped in eroding the social cohesion that was built. They have, along with the leadership of the CA, created strife about what the building should be used for (despite the redevelopment plan developed from WIDE stakeholders consultation; bylaws/constitution governing NHAC & management plan for the CRC) & who should be in control.

Each one of the SDC “community development officers” (not worthy of their hire) came into conversations with me with a level of IGNORANCE of their jobs and mandate (strengthening capacity of local groups is NOT your job. That’s an intermediate outcome but NOT your job. Your job is what you do to arrive at that outcome); disrespect & arrogance that are all antithetical to the ethos of community development. They’re “experts” and “stars” and project that unto the people in their tone and actions. And I refuse to countenance that.

This rant is not the end of my efforts to have the SDC do what they are mandated to do and hire people COMPETENT enough to do the job and the ATTITUDE that’s required to get the job done effectively and respecting the dignity of those they serve. On Thursday, September 24th, the day of my precious mother’s bday, I was summoned into a meeting at the constituency office of the MP, with SDC officers, CA President, NHAC president, Councilor, citizens (MP didn’t make it) to discuss WHY the CA AND CDC cannot use “building”. I introduced myself and gave a background of the work we did, the governance structures we set up; my relationship with SDC during and after the life of the project, and asked the Parish Manager & her charge about the objective of the meeting and how do we ensure that this matter with the SDC and the CA does not continue. The parish manager for Portmore launched into a defensive attack (being aware of all of the issues that we have had with the CA by her own admission). The Councilor present had to indicate to her that the question was legitimate since we have been down this road before and even had a meeting with the mayor of Portmore. The exchange was unpleasant and the Parish Manager demonstrated a level of arrogance that was evident to all present.

Up to this day, SDC has NOT had a conversation with citizens or the NHAC. They are well aware of the project and why we started the NHAC (as the Parish Manager acknowledged). I had previously asked the SDC to invite the NHAC to be a CDC member. They refused because the NHAC was not started by them. This demonstration of negligence leads me to think nothing other than the SDC destroys what it has not built even though that thing is working. If it cannot be said that SDC did it, then it cannot exist.

SDC doesn’t have a monopoly on community development. SDC employs officers that drive cars out of office but DO NOT go into communities. SDC has officers who are incompetent and do not have the capacity to help the organization achieve its vision and mandate. SDC needs a change in its leadership DNA (EVERYTHING RISES & FALLS ON LEADERSHIP). How does an agency imagined with such good intentions become so redundant and useless?

The sad part is that I don’t even care if they take credit for the work but the citizens may. Because as I’ve itemized, they are ones who really did the work. I was a lowly facilitator. What really ANGERS me is how they have intentionally sought to undermine the work of Deedra Harris and the hard-working advocates and all their partners.