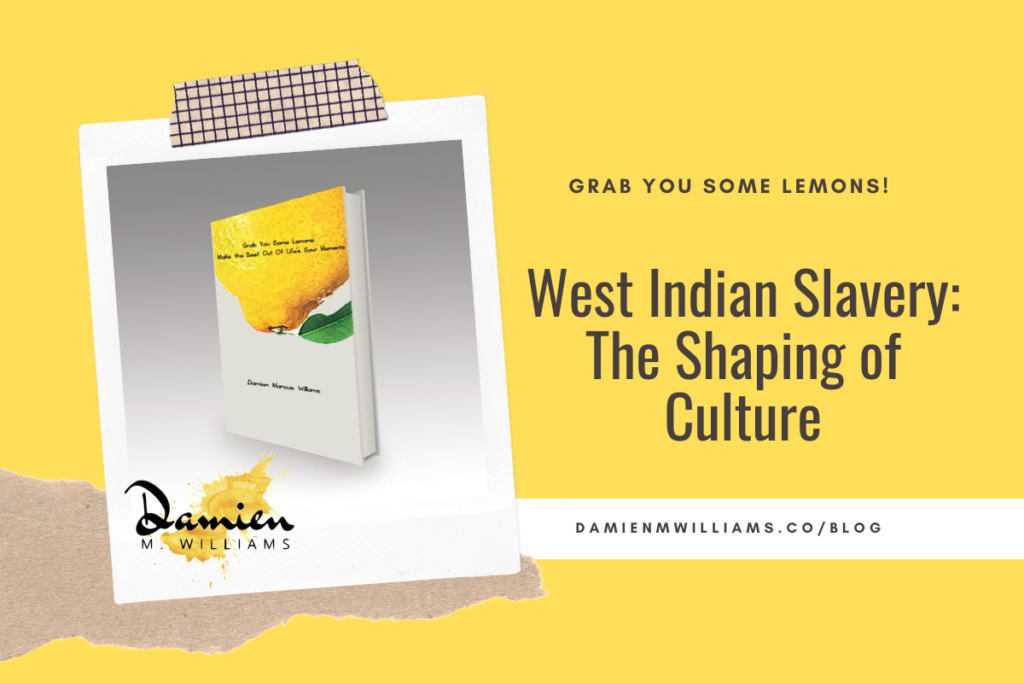 The impact of West Indian slavery on the cultural landscape of the Caribbean cannot be under estimated or taken for granted. In the entire discourse on West Indian slavery, it is often taken for granted that the discussion centres solely on enslaved Africans. However, slavery brought to the region not only African but Europeans (Spaniards, French and British) and consequent to its abolition, there was the advent of the east Indians. We see the impact of their influence in the names of places; the foods we eat; our music and dance; our arts and craft, gender and sexuality.

As these and other anecdotal evidences are examined and the academic contributions of others are analysed, Caribbean culture will be clearly defined and its origin established. Slavery and its attending impact upon Caribbean culture have been both positive and negative as remnants of the social/class system of the “plantocracy” linger and take deeper root in the Caribbean community, in general and the Jamaican landscape, in particular.

The contribution of Africans to Caribbean Culture

As a region with a predominant African antecedent, we begin to engage the discourse from the perspective of the influence of In her book, “Our cause for His Glory”, Shirley Gordon (1998) examines the influence of Africans tradition on the practice of religion in Jamaica. She noted that the European missionary pastors, during the period of the Great Revival noticed that outside of the walls of their chapels the newly freed Africans adopted native Baptist and Myal activities in the practice of their religious activities. She went on to state that the Great Revival, which saw the spread of the indigenous church in Jamaica, was deemed unacceptable by the European pastors who were supposedly averse to the Afro-Jamaican Christianity exhibited. These practices included very ecstatic behavior like crying and rolling on the floor and shouts of repentance; mixing the customary Myal practices of the Africans with the European religious sacraments. Perhaps this marked the birth of the Charismatic movement in the Jamaica.

Furthermore, Slavery has created within the Caribbean context the class system which has become a main-stay of our society. The way we talk and the things we practice is influenced by the modern capitalist society yes, but we cannot deny the impact of slavery on the issue of classism that plagues our region. We have moved into the present with the superior white, the pompous mullato and the marginalized black, field slave mentality. Donna Hope ( 2006 ) cites Edward Kamau Brathwaite as stating that creolisation was a cultural action or social process that affected elites and masters as well as labourers and slaves. Creolisation, she adds is reflected in the dichotomy of Jamaican culture and life where “the predominantly lighter-skinned elite classes continue to maintain a broad cultural and social divide between high and low cultural and social practices.” This creolisation is reflected in language; the various Caribbean creoles and dialects that are often repudiated as they create tension between the “superior European culture and the African culture.” In fact, Creole languages which are almost two hundred years old and came about during the first slavery era in the Caribbean is a “patois” that is a varied combination of African syntax and European lexicon, or words. It evolved out of necessity as slaves had to communicate with the European plantation owners and though forbidden in its use because of its association with the poor labour class, it has perpetuated itself in local culture. Anecdotal evidence supports this claim as today one who uses the Jamaican Creole /patois is not as venerated as one who speaks “properly” (what is otherwise called Standard English). This practice of classism and elitism within our culture finds its roots in the unjust practice of slavery where anything African was inferior and should be subjugated to imperial practices.

The music of the region, tells the tale of slavery. The big drum dance of Grenada/Carriacou, shango and soca of the Eastern Caribbean and in particular Trinidad and Tobago and Kumina and dancehall of Jamaica are all reminiscent of our African ancestry. In her book, Sound Clash (2004; 103), Professor Carolyn Cooper identifies the African Traditions that takes on a subtle but very present undertone in the dancehall performance and lyrics. She proposes that “Lady Saw’s erotic performance in the dancehall can be recontextualised within a decidedly African diasporic discourse as a manifestation of the spirit of female fertility…Yoruba Oshun.” In Jamaica, Cooper says, Oshun reappears as the “River Mumma of folklore and religion, both myal and revival.” In her discourse on the justification of slackness “inna de dancehall” Cooper argues that what I seen as misogyny is really a celebration of the female sexuality and the orisha; the female deity of African folklores. This perhaps explains the dancehall ethos, where there are many a song about women and women’s sexually. Though often misinterpreted as misogyny, it may very well be retention of the veneration that Africans, brought to the Caribbean, had for women and carried in their folklores. Perhaps we can stretch this application to the sexually explicit gyrations and shaking of the female posterior that are also characteristic of the soca genre of the Eastern Caribbean. Both dancehall and soca seem to focus on the female body as the men within those spaces often call for the women to shake/roll their “bumpers”(posteriors); both, glaring examples of the celebration of female sexuality. A comparative look at some of the lyrics of both dancehall and soca/calypso would reveal that similarity (certainly cognizant of the fact that all things similar or not necessarily the same).

Shabba Ranks:
Who seh dat woman can done?
Tell dem seh di woman don’t come to done.
One jook, one wash
And den you turn it down again
Open yu foot
A next man welcome

Saltfish stew is what I like
So doo-doo, give me day and night
I like you food, so don’t find me rude
My favourite, I sure every man in here
Already eat it

Saltfish
Nothing in the world is sweeter than saltfish
English, colloquial, Bajans
Saltfish
Its sweeter than meat
When you want to eat
All saltfish sweet

Both artiste sings about women and female sexuality. In the eastern Caribbean, the assignment saltfish, may refer to a cured form of fish used in meals but may also be an assigned name given to the female genitalia. Similarly, Ranks’ song “Ca’an Dun” is, according to Cooper (2004; 86), an allusion to the proverbial sexual plentitude of women in contrast to men’s finitude.

Moreover, in the navigation of the Caribbean cultural identity, understanding hostile conditions of plantation life and the immediate post-emancipation period is important to interpreting the seeming anti-establishment (colonial dictations of that which is socially/morally acceptable) behavior of the Afro-Caribbean person and the violence that is now becoming pervasive in the Caribbean. The Euro-British legacy of divide and rule which existed on the plantation among the enslaved Africans; domestic against those in the fields against those in the factory and then all these Africans against the Indian indentured servants still persists in Caribbean society. The antagonism and need to fight continues. “It is this psychological legacy of slavery and indenture that permeates fashions and condones the antagonistic and sometimes violent interaction between Afrikan and Indian in Trinidad today.” Nantambu further asserts that the inequity that existed between Afrikans and Indians consequent to their differing contexts (Indians were brought here as paid labour while Africans were violently brought as forced, free labour) as well as the British-imposed apprenticeship system, which was callously designed to cement the Afrikan in a permanent state of powerlessness are contributory to the tensions within the Trinidadian society. Perhaps the same is true of the Jamaican reality. As Nantambu postulates, “The Euro-British placed the Afrikan in ‘no-man’s land’ where he still remains today… the most detrimental and mental effect of European slavery.” Could the reasons for the proverbial Jamaican aggression lie in Nantambu’s theory? That the Afrikan had to fight through a system of oppression, inequity and denigration, is probably a way of life that has persisted and has now re-emerged as aggression.

Additionally, in understanding gender identity and roles in the Caribbean, one cannot the historical experiences of the region. According to Donna Hope (2006), slavery is one such important historical experience. Hope says that both elites and masters as well as labourers and slaves in the Caribbean were affected by a cultural action that incorporated the dominant Eurocentric and subordinate African elements of the society. Among the historical legacies of slavery, creolized issues of sexuality and identity were inextricably linked to race and gender hierarchy. Consequently women and non-whites were viewed as savages; people with uncontrollable sexual desires and so needed to be controlled by men – white men (Hope, 2003; 38). It is in this climate that the black woman learned that her body and role in the Caribbean environment is one that is sexually linked. The attending gender assignments of cooking and cleaning and catering to the sexual desires of her man (widely accepted throughout the Caribbean), find roots in the experience of Slavery.

It is rather interesting that in a “progressive” society, our behavior and practices are firmly rooted in our past. It is ever possible to wrest ourselves from the harsh realities of slavery and its ensuing impact upon Caribbean way of life? Probably to do so may mean rewriting history (our-story) or maybe knowledge of where we are coming from is what we need to help us embrace those parts of our history that must be held on to and celebrated and relinquish the undesirable parts: our acceptance of being powerless; our antagonistic propensities… One thing is certain; the impact of slavery has influence current Caribbean way of life both positively and negatively, lingering and taking deeper root in the Caribbean community, in general and the Jamaican landscape, in particular…