Rising to the top of the world in any field of pursuit is no mean feat. It takes more than sheer luck or divine intervention. It takes A LOT of discipline and hard work, to say the least. But when you have given all you can to chase your dreams and it seems elusive or out of your grasps, it takes an equal amount of discipline and hard work to stay the course and never give up.

Asafa Powell is one of Jamaica’s sprint kings who will go down in history for having run the most sub 10 seconds races in the world. He is multiple individual world record holder & several times gold medal winner & world record holder in the men’s 4x100m relays. Powell revolutionized Jamaica’s male sprinting, breaking American dominance with his lightening fast speed and setting himself up as the fastest man in the world, having held the world record between June 2005 and May 2008, with times of 9.77 and 9.74 seconds. His personal best of 9.72 is the fifth fastest time in the history o the 100m event. In February, 2012, The University of Technology (UTech) awarded him their highest award, The Chancellor’s Medal in recognition of his rise to international athletic supremacy. He is also recipient of the Diana Award, the first in the Caribbean & Central America to be so awarded. According to a 2012 Gleaner article, “The presentation of the award to young people from across the globe who are committed to helping others and improving their communities is in keeping with the remarkable charitable work Lady Diana pioneered around the world.” 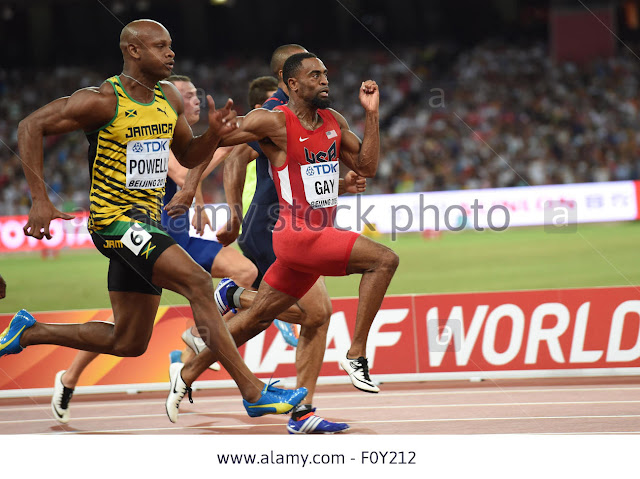 However, despite all his accomplishments of breaking and setting world records and being a Jamaican athletic pioneer, there seems to be one dream that is elusive – an individual gold medal at (the two) major world championships. That World and Olympic gold seems to be the proverbial carrot dangled in front of the sub-10 king but never laying hold of it. This singular elusive goal has caused many of us to forget just how GREAT a man that Powell is. I have put together 10 lessons I have learned from his life that reminds me o the true foundation of GREATNESS:

5. His Resolve: Many have suggested that he retires and goes into modeling (of-course because of his penchant for being in front the camera in various states of undress). But there is this subtle defiance that Powell demonstrates that is admirable. That he will retire on his OWN terms when he is good and ready is the same kind of “stealy” resolve that has brought this man to the top of the world. He is the author of the only dictionary that will define him. It takes that kind of focus to succeed in life. You cannot listen to every noise or else it can take you off your path. Perhaps Powell has heard many dissuading words along the way. What if – just what if he had taken the advice of those who ever said to him that he CAN”T? What if you took the advice of everyone who put a limit or expiry date on you. Kudos to Powell for remaining resolute. It takes a lot to do so amidst nay-sayings.

4. His Stick-to-itiveness: This is not to be confused with his resolve. It takes a lot to be an athlete – endure the rigours of training and the impact it has on the body. It is often a painful process. Most of us, I am sure, will roll over an hit the alarm clock into silence when it roars at 4:00 a.m. in the morning for us to wake up and head out to beat our bodies into preparation. And that is only the process to endure. Success is like planting a seed. You have to bury it. It goes into the ground and nobody knows it is there until it springs forth. So, often, we only see the tree but refuse to acknowledge the seed that died so that it could spring forth. What we see on the tracks is just 10 seconds demonstrations of the hours of grueling training that the body is subjected to to reach its optimal performance. Stick-to-itiveness is defined as, “the quality that allows someone to continue trying to do something even though it is difficult or unpleasant” and Powell has no doubt demonstrated this in his life and career.

3. His altruism: It is easy to think about acquiring and hoarding wealth for one’s self. But having come from humble beginnings, Powell knows the struggle of being an athlete “trying to make it”. It was for this reason that he started the Asafa Powell Foundation – he wanted to give back to young athletes. The foundation has given cash and gears to a number of high school athletes; a donation Powell sees as small but hopes it helps to make them better athletes. It is admirable that he could see his social responsibility in this regard. While success is easily measured by what you have acquired or accumulated for yourself. It is what you do for others – the impact that you have in their lives – that makes a person GREAT. Through his own foundation, Powell is pushing passed just being successful to being a man of GREATNESS. I, too, will rather be measured by my altruism – the IMPACT I have had on people, rather than the “impression” that they have of me.

2. His Ability to handle adversity: Life WILL throw us lemons. That is perhaps un/fortunately part of growing. Growth is very much a painful process. It stretches us beyond our comfort zones and forces us to evolve and adapt. We may choose to complain and to cry “woe is me” or grab those lemons and juice them. In 2013, I watched as Powell had to withdraw from the World Athletics Championships for having tested positive for the drug oxilofrine. His dream of perhaps winning his first major gold medal once again pulled from his grasps. Rumours swirled around. His reputation was at stake. Jamaica’s renown as (drug-free) sprint capital stood to be potentially undermined by this revelation. In April 2014, the Jamaica Anti-Doping Commission pronounced an 18 months suspension over doping charges, expiring in December that year. The weight of personal adversity is perhaps enough to cause anyone to throw in the towel – and with good cause. However, convinced of his innocence, appealed to the Court of Arbitration for Sport (CAS), which reduced the suspension to 6 months. During the period, he again showed his mettle by continuing to train despite his ban, while his team worked to clear his name. It is during times of personal adversity do we get to see what we and others are really made of. Powell showed us calm, focus, diligence and the age old adage that it is never over until it is over.

1. His Humilty: Humility is such an underrated virtue.Perhaps for Powell, it is what has made him so likable. There is a strong sense of being proud of his humble beginning – being rooted in his love for his family. Humility is not a shrinking (or as Jamaicans would say, “smalling up”) of self. On the contrary, it says, “I know I am”. It is a healthy awareness of self and valuing of others. Humility, like love, does not vaunt itself. It takes great character to remain to grounded after all one has accomplished Perhaps this is what I admire most about Powell.

Perhaps, just perhaps, if we measured each other and ourselves beyond the “stuff”, we would realize that there is so much more value to life and that the worth of ourselves and of others is far more than what we have or our accomplishments. It is those intangibles – the virtues, that make us, really, quality human beings.