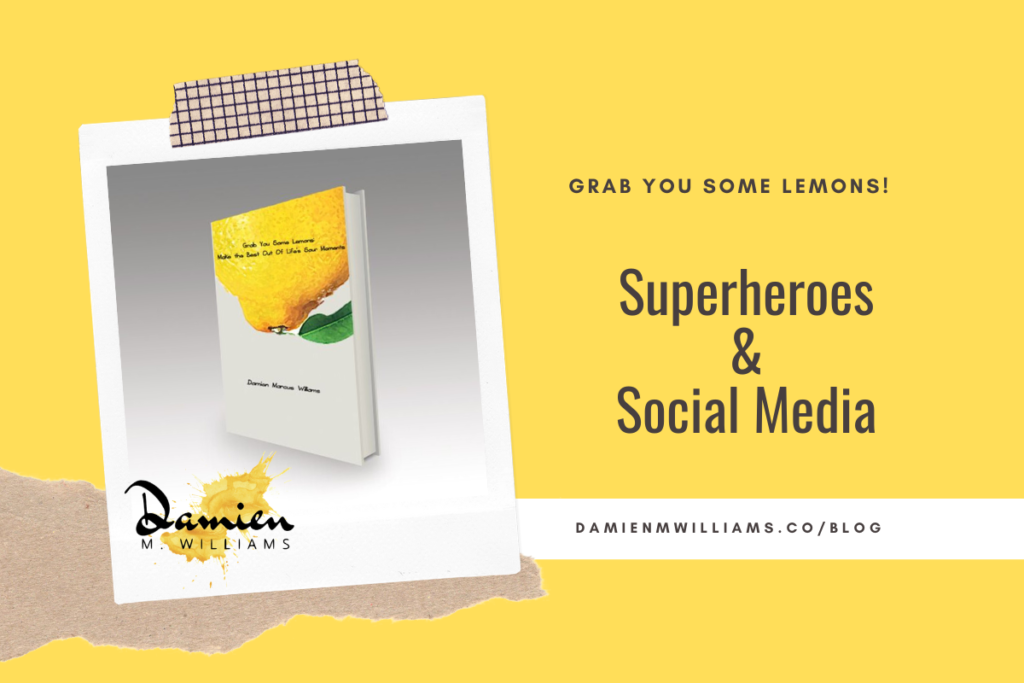 Social Media, and in particular twitter, has become a space for spewing caustic and vitriolic effluent at people with whom we disagree. I am sometimes amazed at how people feel so empowered and emboldened sitting behind a screen to descend into the bowels of utter nastiness to express dissent to something that someone else posted. It is worse now that we have 280 characters instead of 140. It means that the nastiness is times two. But social media can be and has been used as a source of good.

I have been the beneficiary of deep friendships and formed a formidable network of people who have supported and pushed me along in my professional and personal life. Yet, we do not hear many stories about the power and reach of social media. In this post, I want to speak about a quiet Superhero that I encountered on social media.

I had been working in three vulnerable communities in the last couple of years on a urban disaster risk reduction project being implemented by Habitat for Humanity Jamaica (Jam-Habitat) on behalf of Habitat for Humanity International and funded by United States Agency for International Development/The Office of U.S. Foreign Disaster Assistance (USAID/OFDA). The project used a neighbourhood approach and participatory methodology in its attempt at Building Resilience And Capacities against Emerging Disasters (BRACED). It is difficult to seek to build resilience without touching on issues of governance, safety and security, economic empowerment, health, social inclusion and social cohesion. And while our project achieved great results in socially re-engineering those communities as a whole, there were individuals who were left behind because of the scope of the project and strict budget guidelines.

So, on the morning of Thursday, January 18, 2018, I reached out on Twitter. I had a need for somebody in one of the communities that I work in. She had been left behind – not only by the project but her own family. You see, 15 years ago, Abigail (Name changed to protect her identity & dignity)suffered meningitis while she was still a baby. This left her with malformed hands and feet and epileptic seizures. Unable to walk, she moved around on her elbows and knees. She had never been outside. Her neighbours did not even know she exists. She had never been immunized. Never went to school. But this beautiful, polite articulate and effervescent young lady would melt your heart with just a smile. I needed to get her a wheelchair so that she could move about. I needed her mother to affirm her by taking outside of the house if even to get some sunlight (Vitamin D). Within and hour, my tweet asking for a wheelchair had been Retweeted more that 200 times. Many offered advice about where I might be able to source one.

However, one follower quietly messaged me and asked me to go source one and that he will pay. I sent him pictures of two. I wanted to choose the cheapest one as possible because, after all, I did not want to abuse this God-sent’s kindness. His question was, “Choose the best of the 2”. The best of the 2 was $30,000 more than the cheaper one. I had my assistant got to the Portmore Self-Help Disability Organisation, a brilliant social enterprise that is built on social inclusion, economic empowerment and visibility of people with disabilities (I love that organisation and Bridget is extremely passionate about her work. But that commentary is for another post), to fit the wheelchair for Abigail. She love it – the comfort, the strength. For the first time she did not have to crawl around on calloused knees and elbows. 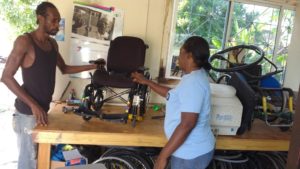 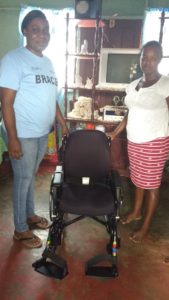 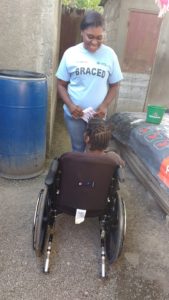 Not only did this God-sent donated a wheelchair but cash for groceries for an entire month for Abigail and her family. I delivered the HUGE box myself. Abigail came alive because most of the things in the box were things she said she wanted and they were all hers. She knew undoubtedly that there was someone out there who cared for her. Just when you thought that kindness could not be extended any further, Abigail’s kind benefactor paid for her to see a private doctor, where she was fully immunised. 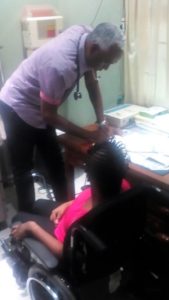 What is even most heartwarming about the absolute selfless act of random kindness is that he has done this so quietly, never wanting to be named or receive honourable mention on twitter for what he has been doing for Abigail. He has gone as far as arranging for her to have learning assessment done so that she can have the hope of a future through education. I choose to mention Mr. Douglass Halsall because too often, kindness like this goes unnoticed. Bad news travel fast and far and silent acts of kindness and goodness in the earth and on social media get buried beneath all of the vituperation and nastiness that have now come to define the space that is “social media”. I lift my heart of to this GIANT of a man who, in his silence, stand tall in Abigail’s and my book of superheroes. 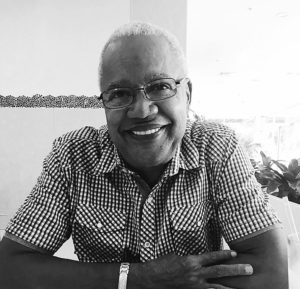 His example serves as a reminder to all of us that one simple act of kindness can go a far way in changing our world but it also serves as a challenge to those of us who use social media for mischief and hurting others, to use the power of networking that this tool affords us to change the lives that are around us. By touching this one child, Mr. Halsall touched an entire community.