Development Work Takes HEART: My Reflection on Transforming a Community 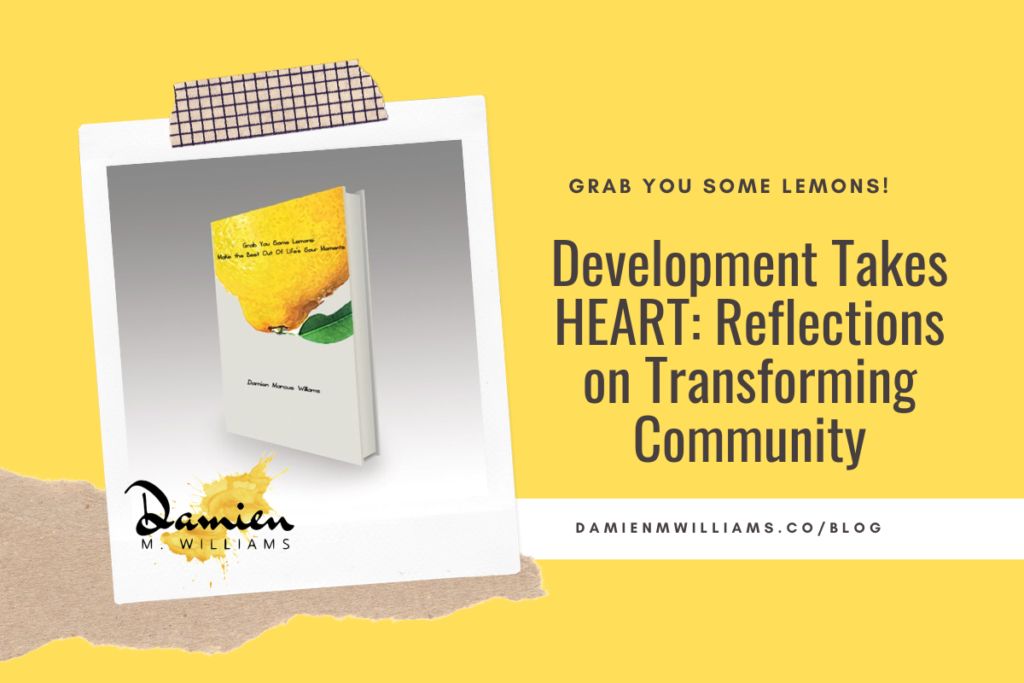 When I just went into Naggo Head to work, I was the community’s 4th mobilisation officer. I was being offered a salary of JMD$60,000.00 BEFORE TAX. This could not even meet my monthly expenses. However, I saw an opportunity to not only make a difference but to learn and grow. The less than competitive salary package and the perception that Naggo Head was a difficult community were perhaps determining factors in the high attrition rate of mobilisers. 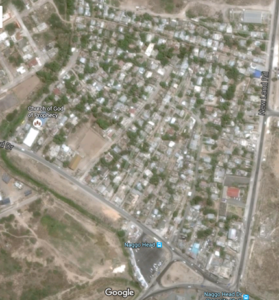 Naggo Head, St. Catherine (See figure 1 above)is a flat peri-urban, coastal community vulnerable to flooding; storm surges, tsunamis, hurricanes, earthquakes and droughts etc. It is located in the municipality of Portmore, in the parish of St. Catherine. The data collected by MGI also cited poor drainage, poorly constructed dwellings, use of sub-standard materials, limited (and in some instances no) sanitary conveniences and improper solid waste disposal. These conditions make Naggo Head among the most vulnerable districts within the already vulnerable Portmore Municipality.
Naggo Head District is divided into nine lanes (the diagram below was drawn with the help of members of the community – one of the many maps created from the participatory approach: 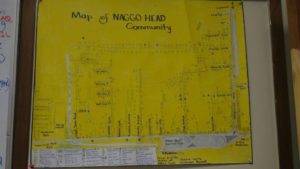 When I went in, there was no local governance structure. The people needed to be galvanised around the idea of creating a better community. However, they were suspicious and wary of being hoodwinked like by another implementing agency who came and made promises that they did not fulfil. I had my work cut out for me.
The community had a problem with waste disposal: solid waste, waste/grey water, human waste. This meant that the community was fecund ground for the promulgation of every imaginable vector and highly susceptible to disease outbreak. High unemployment rate; high levels of truancy; teenage pregnancy; single room, single female headed households with visiting partners relationships; and poor housing solutions were among the glaring socio-economic conditions.
My first day out in the community left me sobbing. How could people be living in such squalor? The pungent smell of human excrement clung to the air around you and the wooden houses that too many of the citizens lived in were only short of being death traps.
There were many everyday social needs that the project was not in a position to meet. Jam Habitat for Humanity International 2014 Limited was established to implement Building Resilience and Capacities Against Emerging Disasters (BRACED), which is an urban Disaster Risk Reduction (DRR) project, to the communities of Naggo Head, Gregory Park and Newland. This introduced to the community the notion of creating a sustainable community and the associated ideas of liveable neighbourhoods, which is expected to lead to some interesting explorations towards its redevelopment.
There was no budget line for mobilisation efforts. The volunteers – unemployed men and women from the community- majority of whom were parents, who were the real drivers of the implementation were not given a stipend. They were working on building garbage receptacles, helping with transect walks and community mapping and for their trouble, they were being provided a box lunch. I remember seeing a number of them just pinching a morsel from it and taking it home. I later learned that they were taking it home to share among their children.
So, here I was, in what was considered a failing community, where everyone was looking handouts, with no handout to give and a project to implement. I took note of the sacrifices that the volunteers I had were making. In every community you will always have those faithful ones who are not looking for anything in return other than a better community.
My first task was to gain their trust. Many days, I would carry food stuff into the community and we would “run a boat” (do communal cooking) – rice and tin mackerel or rice and curried chicken back. It was an opportunity to bond and for me to share the goals of the project and build some social capital to get the work done. But it was also a response to the lack that I saw. Much of the money I used for mobilisation came out of the $60,000.00 I was being paid as a salary. It was important to me that I built authentic relationships at the community level – that I truly understood (and not go by the assumptions of a project document) the realities of the people I was called to serve (servant leadership). In building this relationship it was important for me to establish with the community that we were equals but they were the experts and I was there to learn how to best serve their interest. 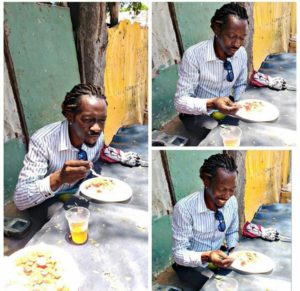 Having a meal in the community

Pouring My Heart Into It

I had approached the people in the community from a position of WORTH rather than lack or deficit. Their worth were not determined by the situations they found themselves in but because of their humanity. “These people would know how to cry sob stories to you. You have to be smart,” I had been warned. However, I was insistent that they were worthy of being heard and having their stories believed. So, I began my work in Naggo Head by employing a model of affirmation #YouAreWorthy!! I looked for and praised the talents of each of the persons who came alongside me to help.

Building Social Capital took planning and intentional effort. Though I knew NOTHING about football, I orgainsed a 6-a-side football tournament, in an effort that will also bring about community cohesion. To attract the teams, I would need prizes and to have prizes, I would need money but this effort was not along budget lines to I resorted to good old-fashioned begging for sponsorship to meet needs. We had a successful football competition and I had the ears of everyone who attended to tell them about the project and its objectives. 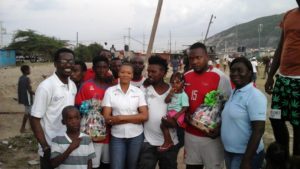 (In photo are the winners of the 6-A-side football competition; representative from sponsor, Rapid True Value; Community Volunteer, Ms. Deedra Harris and myself)

The real needs were still before me and I solicited assistance to donate food to the most vulnerable and money to assist with some students going to school. It was in recognition of those material needs that cause me to partner with the community to host a back-to-school treat. However, I believe that what won me the community’s heart was the Christmas dinner and awards for BEST community volunteer. It was the acknowledgment of their efforts – of all that they had sacrificed to help me do my job effectively. I had the venue decorated, plaques made, three course meal prepared, as scores of community members were feasted and appreciated for their efforts. They learned that day that they were SEEN! 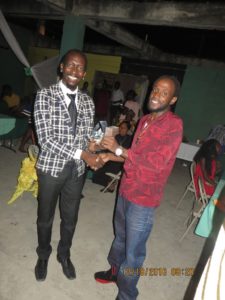 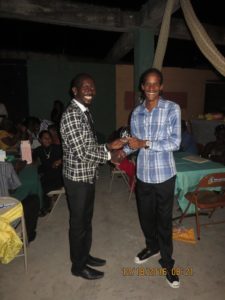 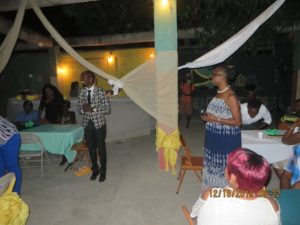 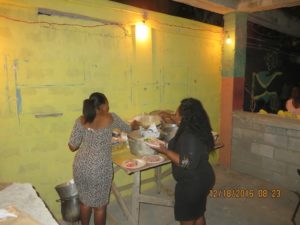 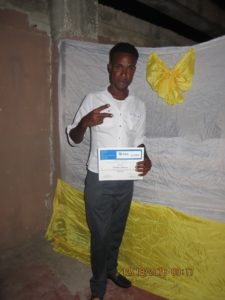 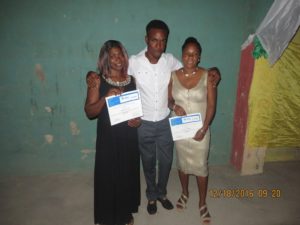 Among the achievements that I am most proud of were that I was able to:

1. Establish TWO community governance structures (a citizens association and a development advocacy group, which are registered by SDC and Benevolent Society respectively). They are both active and have been empowered enough to build on the gains of BRACED.

2. Establish a local financial model that allows people to access low interest unsecured loans (Community Savings and Loans Plan – CSLP) for the purpose of providing affordable access to housing. (System has been set to evolve this into a community insurance to respond in cases of a disaster).

3. Manage a research project where 468 of the 500 household participated in answering all those invasive questions because of the social capital that you built. There is a wealth of data on the community that can be used to inform development priorities for them.

4. Manage the process, at the community level, for citizens to cooperate in the land surveying process so that applications can be made to LAMP in order to place titles into the hands of residents for the first time in generations.

5. Help design, organise and give oversight to a model Local sustainable development plan (LSDP), which boasts a methodology that none other on the island can.
6. Develop a community-based training module in shelter management that increased the capacity of community members to prepare for and respond in the event of a disaster.

7. See people who had no skill, gain skills and some set to go back to get DEGREE!!

8. Implemented a participatory hygiene and sanitation transformation (PHAST) program that turned around waste (human & solid) disposal by more than a marginal percentage (Photos below show PHAST in motion in the community) 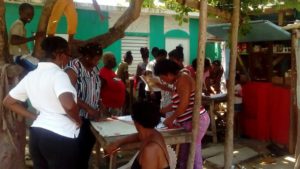 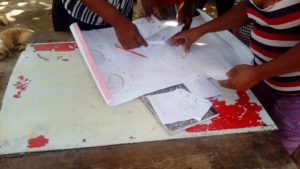 9. Design and supervise research project on “Dignity Through Sanitation: The Social, Cultural and Economic Barriers to Proper Sanitation”.
I am proud that I have served this community well and that their success is already part of my legacy. I leave behind strong local governance structures; an LSDP; a Disaster Plan; and action plans for 5 community committees. When you can do that with a community labelled as failing; when you can come from the back and see that community stand on it’s own, then I guess you can boast a little, while being grateful for the opportunity to have lived your purpose.
I thank the people of Naggo Head (not that I don’t love the other TWO) for opening up their hearts, heads and homes to me and for granting me the privilege of their trust. Your best is yet to come. NEVER forget, #YouAreWorthy.
May we NEVER, from our policy, activism or advocacy respond to any community from a position of deficit but from the position of their WORTH!!